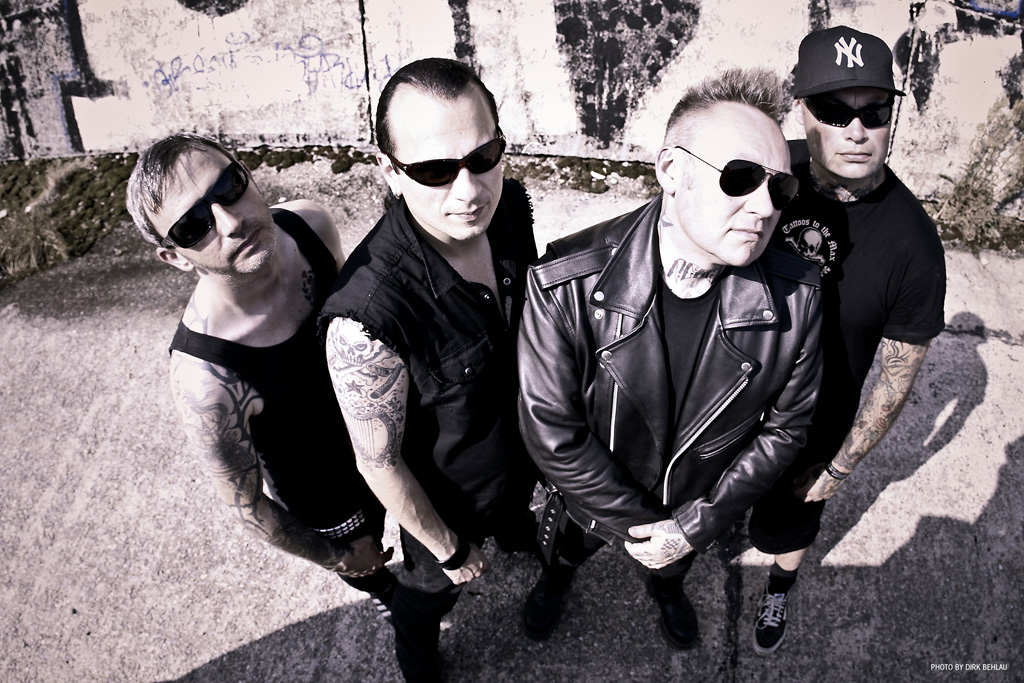 THE BONES are back in the ring with another swing!

Is it really already five years ago since Sweden’s finest Punk’n’Roll outfit took over our stereos with
„Burnout Boulevard“? Apparently it is, but the good news is: the wait is over. On „Monkeys With Guns“,
the fifth studio album in their enduring career, THE BONES are back blazing with 15 (17 on the
Limited Edition and LP) blistering, hard hitting new tracks of perfect Punk’n’Roll marriage material
made in hell.
In our case, hell is a lovely little harbour-town called Karlskrona in the Southwest of Sweden. That’s
where it all started out for THE BONES back in 1993. Back then singer/guitarist Beef Bonanza, along
with his brother Spooky Fred and bassist Dollar Ace, were working on their first demos, which already
included soon-to-be-classics like ‘I Met Elvis At The Nudybar’ and ‘Monsters Prefer Blondes’. When
singer/guitar-slinger Marcus „Boner“ Petersson entered the picture in 1996 things began to speed up.
Sharing a mutual love for high energetic punk and rock music in the vein of The Ramones and
Motörhead and 50s and 60s rock’n’roll, THE BONES were always influenced by the melodic qualities
of bands such as The Bay City Rollers and The Barracudas as well. After self-releasing „The
Horrorway EP“ in 1997 german punk rock label I Used To Fuck People Like You In Prison Records
caught an eye on the ear-catching qualities of THE BONES. Following two more EPs, „Rock n‘ Roll
Race“ and „Six Feet Down, Two Fingers Up“ the swedes finally released their adeptly titled debut
album „Screwed, Blued & Tattooed“ in 2000 to critical acclaim.
The sonic equivalent of Elvis, Johnny Cash, The Ramones and Social Distortion jammed in the
backseat of a cadillac watching „Grease“ at a seedy Drive In, took Punks, Rockers and even
Metalheads by storm. The next album „Bigger Than Jesus“ followed the success of its predecessor
and THE BONES reputation as a a killer live act began to grow instantly. Sharing the stage with bands
and friends like Motörhead, Cockney Rejects or Die Toten Hosen, THE BONES had made it from the
local swedish youth clubs to the top of europe’s club- and festvial circuit, building up a strong following
of like-minded rock’n’roll party animals. By 2004 Dollar Ace had left the band and long-time friend Andi
Nero premiered his bass-playing skills for the first time on the follow-up album „Straight Flush Ghetto“.
2007 saw the release of „Burnout Boulevard“, yet another album that showed no sign of THE BONES
having lost just an ounce of their gritty integrity and energy. After more than seven years of travelling,
playing and recording THE BONES decided to take things a bit slower. With their first live-DVD „Berlin
Burnout“, recorded at Berlin’s famous punk venue SO36 in 2008, the band still managed to throw their
fans the figurative bone, before returning to the studio.
It’s 2012 and the wait is over. „Monkeys With Guns“ marks THE BONES’ return to form in a new
decade. Having teamed up with producer Magnus „Mankan“ Sedenberg, the guy that can be held
sonically responsible for his great work on the first three Bones’ albums, the band is now ready to rock
and roll again.
„Well, it was great hitting the studio with producer Mankan again…We had some expectations about
the sound and we got it!“, says Beef, „We puzzled our schedules together best way possible and
BANG!!! The new songs are still in the shape of THE BONES which means dirty punk rock´n´roll but
still sing-a-long. And now we´re looking forward to the release of the album and to meet the fans and
supporters.“
From the classic tongue-in-cheek track ‘Bones City Rollers’ to the anthemic, Hanoi Rocks-influenced
‘Concrete Cowboys’ to the high roller Motörhead-anthics of ‘State Of Rock’n’Roll’; from ‘Cemetry Sue’
covering the twangy surf turf to the Ramones-nod of ‘Hooligan Bop’ and the pelvis-shaking Presleyhommage
of ‘This Hound Dog Rocks’ – THE BONES deliver nothing less but the essence of their
game: Punk’n’Roll with attitude and hooks as big as King Kong with an Uzi at the top of the Empire
State.
So grab yourself another beer, put your favourite rockabella on your lap and crank up the stereo with
„Monkeys With Guns“. It’s time to rock. And roll THE BONES….